The Etihad stadium will host the Manchester derby on Sunday, a fixture known for being electric to all football fans worldwide. Mourinho’s team pulled off a fantastic comeback last year, overcoming City’s 2-0 lead to win 2-3. City has infact failed to beat their neighbors in the last three derbies held at the Etihad.

Both teams boast expensively assembled squads, so let’s take a look at what a combined eleven would look like.

Goalkeeper: Ederson is good with his feet but David De Gea has been world class in the EPL for the past few years. At club level, he is second to none. Read more here: David De Gea is the Messi of goalkeepers

Full Backs: Manchester City win hands down in the full backs category. Walker and Mendy are not only the two best full backs in Manchester but would also make the list of top full backs around the world. The likes of Shaw, Young and Valencia do not make the cut.

Center Backs: Victor Lindelof has been very impressive recently, turning around a bad start in Manchester and claiming a permanent spot in Mourinho’s defence. The “iceman” has been particularly brilliant against European powerhouse Juventus in both legs. On current form, he has my vote. City fans will be wondering how Laporte does not selected for France. It’s certainly not due to his form or talent. The frenchman has been impeccable since his move to the Etihad.

Midfield: Fernandinho has no competition when it comes to the holding midfielder role. Matic has been subpar this season. David Silva’s class automatically wins him a spot in the team. No explanation needed here. For the third spot, it goes to Paul Pogba. The frenchman, while frustrating at times, is a top player. In last year’s derby at City’s home, he was the one who brought his team back in the game with two goals in the second half. He has been instrumental of the lef hand side and helps gets the best out of Martial. If De Bruyne had not been injured, the midfield would have been completely blue but in his absence, Pogba sneaks in.

Wings: Anthony Martial’s form of late has got United fans salivating at every one of his touch. With 5 goals in his last 4 Premier League games, the french attacker has been recalled by Deschamps for the national team and also gets a place on the left wing in the combined eleven. Speaking of young, pacy offensive players, Raheem Sterling made a lot of fantasy players happy with a 21 points haul last gameweek. City is about to make him the best paid English player in the world and he deserves every penny!

Striker: Just like Fernandinho, Aguero has no competition from the red side of town. Lukaku is going through a rough patch while Rashford is still inconsistent and cannot secure a spot in the team. The only competition is from his team itself in the form of Gabriel Jesus who managed a hatrick during the week in the Champions League but the Argentine striker’s longevity at the top in the Premier League makes him the only posssible choice.

Let me know if you agree or not in the comments section!

May the best team win! 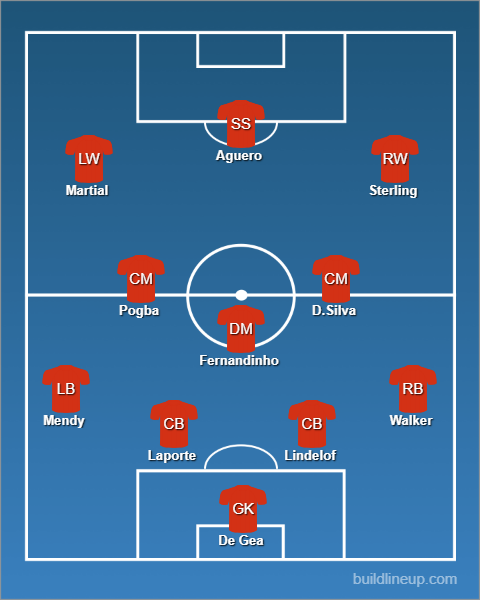 Thanks to buildlineup.com for their lineup building tool!